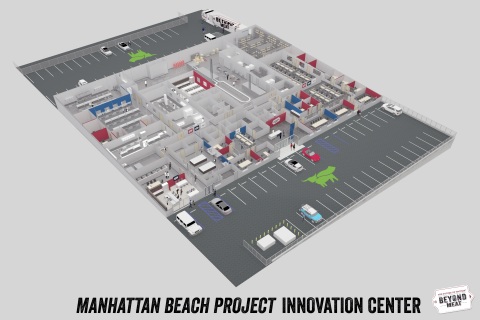 The New Home for the Company’s Manhattan Beach Project, the Center Will Further Fuel Progress Toward a Perfect Build of Meat Directly from Plants

EL SEGUNDO, Calif.--Working to unlock the Future of Protein™, plant-based meat purveyor Beyond Meat announced the building of a new 26,000 square foot research and development center at their headquarters in El Segundo. The new facility will house more than 100 employees, and is the new home to Beyond Meat’s Manhattan Beach Project, the company’s on-going initiative to bring the best and brightest scientists, engineers, food technologists, chefs, and researchers together in service to a single goal: perfectly build a piece of meat directly from plants.

“The expansion of the Manhattan Beach Project here in Los Angeles reflects our belief that building meat from plants is an opportunity of global importance, one that is deserving of investment levels consistent with what you’d find in alternative energy or health sciences, sectors with which we certainly share common goals,” said Ethan Brown, Beyond Meat CEO and founder. “We are seeing a record number of consumers expressing interest in a broader set of protein choices; to these consumers, it is our brand promise to enable them to eat what they love, from burgers to sausage, while feeling great about related health and environmental implications. The new center is designed to help us fulfill that promise to the best of our abilities.”

The center is seven-times the size of the existing facilities and will serve as the foundation of Beyond Meat’s commitment to innovation through accelerated experimentation, learnings, and progress toward the goal of building plant-based meat that is indistinguishable from its animal-based equivalent.

Given Beyond Meat’s mission-driven focus includes improving human health, it’s not surprising that 90% of Beyond Meat’s R&D staff come from biomedical research. Reimagining the use of existing imaging technologies toward a better understanding of the complexity of meat, and applying this knowledge to rebuild meat from plant material, is a key focus for the Beyond Meat team.

“We are leaving no stone unturned in our efforts to perfectly build meat directly from plant materials, using only natural ingredients and without genetic modification. The breadth of processes and technologies we are bringing in-house supports the company’s focus on rapid innovation, in some cases reducing timelines by half,” said Dr. Dariush Ajami, who leads Research and Development at Beyond Meat.

Complementing the efforts on the R&D side will be a cutting-edge gourmet kitchen to host chefs and culinary experts, as well as a formal sensory space for real-time consumer testing and panels. Keeping a close pulse on shifting consumer preferences and trends will allow Beyond Meat to stay at the forefront of producing cutting edge products.

The Beyond Burger is the world's only burger that looks, cooks, and tastes like ground beef from cows but is made entirely from plants, without GMOs, soy, or gluten. Since its debut in 2016, more than 11 million Beyond Burgers have been sold. Along with being available in the meat case at 5,000+ grocery stores, it is also sold on the menu at more than 5,000 restaurants nationwide including TGI Fridays, BurgerFi, Bareburger, & Epic Burger. For the latest list of places to find The Beyond Burger, click the where to find button on the Beyond Meat website.

ABOUT BEYOND MEAT
Based in Los Angeles, California, Beyond Meat is a privately held company founded in 2009 with a mission of building meat directly from plants. Spanning frozen and fresh, Beyond Meat’s portfolio of cutting-edge plant-based proteins are sold at more than 19,000 retail outlets nationwide. Investors include Bill Gates, actor and activist Leonardo DiCaprio, Twitter co-founders Biz Stone and Evan Williams, Kleiner Perkins, former McDonald's CEO Don Thompson, Honest Tea founder Seth Goldman, Humane Society of the United States, and Tyson Foods. To stay up to date on the latest, visit www.BeyondMeat.com and follow @BeyondMeat, #BeyondBurger and #FutureOfProtein on Facebook, Instagram and Twitter.