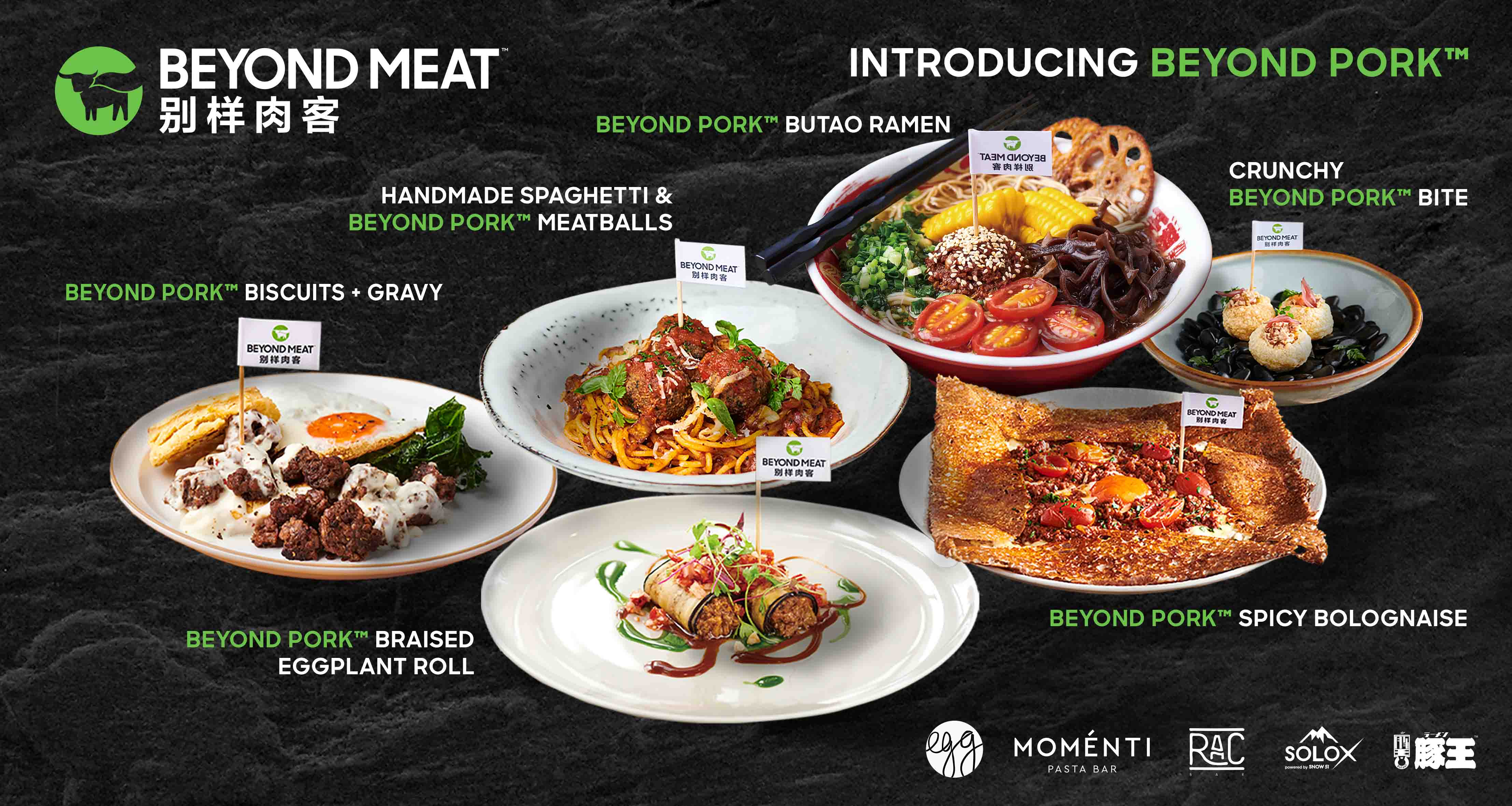 Beyond Meat ® Debuts New Product, Beyond Pork™, in China

BEYOND MEAT® DEBUTS NEW PRODUCT, BEYOND PORK™, IN CHINA

From Nov. 18-24, Shanghai foodies can be the first to try Beyond Pork at five popular Shanghai
restaurants Shanghai, China (November 18, 2020) --- Beyond Meat, Inc. (NASDAQ: BYND), a pioneer in plant-based meat, is announcing its latest product innovation: Beyond Pork™. Designed to deliver the sumptuous taste, juicy texture and culinary versatility similar to traditional minced pork, Beyond Pork was created specifically for the Chinese market and is the next step forward in Beyond Meat’s commitment to creating high-quality products that meet consumers’ demand for delicious, nutritious and sustainable protein.

The introduction of Beyond Pork follows the successful launches of the Beyond Burger® and Beyond Beef® in mainland China and comes at a time when interest in plant-based meat is growing in China and around the world. Pork is the most popular meat in China and the country ranks among the highest pork consumption rates in the world1, making it an excellent location for the unveiling of Beyond Pork. The development of Beyond Pork was a global collaboration between dedicated Beyond Meat teams in Los Angeles and Shanghai. In addition, Beyond Meat conducted multiple sensory tests in China to get direct consumer feedback toward perfecting the product. The result? Beyond Pork was a fan favorite among consumers for its ability to mirror the mouthwatering umami flavor, texture and aroma of animal-based minced pork, while offering the added health and environmental benefits of plant-based meat.

“We’re excited to launch Beyond Pork in China, marking a milestone for Beyond Meat as we are not only launching an entirely new product innovation, but our first plant-based meat product created specifically for the Chinese market,” said Candy Chan, China General Manager, Beyond Meat. “With Beyond Pork, Beyond Meat is providing even more delicious options for consumers to continue to eat their favorite dishes while enjoying the added nutritional and environmental benefits of plant-based meat. Beyond Pork’s exclusive debut in China furthers Beyond Meat’s commitment to this important market and its vision for plant-based meat to continue winning the hearts (and mouths) of Chinese consumers.”

Minced pork is featured in many Chinese dishes, making China the perfect place for Beyond Pork to show off its potential. From dumplings and mapo tofu to zhajiang noodles and lion’s head meatballs, Beyond Pork delivers the meaty taste and texture that Chinese consumers crave but with about 50% less saturated and total fat2. Made from simple plant-based ingredients, like rice and soybeans, Beyond Pork offers a rich source of protein with 18.5g per 100g serving and has no antibiotics or hormones.

To celebrate the launch of Beyond Pork, Beyond Meat is partnering with five popular restaurants in Shanghai, one of China’s food capitals. The roster of partner restaurants features some of the hottest names in Shanghai’s food scene, including Egg, Moménti, RAC, Solo X, and Tun Wang.

“I was very impressed the first time I tried Beyond Pork; I even thought the chef must have actually used traditional animal pork mince by mistake. I think our fans are going to be very impressed when they try it -- I bet they won’t even be able to tell the difference either,” said Simon Briens, Co-Founder of RAC restaurant.

Chefs from the five restaurants all joined a special VIP launch event on November 17 to unveil their dishes at the TX Huaihai Mall in Shanghai. Each chef was tasked with using Beyond Pork as they would animal-based minced pork, and their dishes ranged from RAC’s Beyond Pork Spicy Bolognese to Tun Wang’s Beyond Pork and Shiitake Wonton Noodles. By working with five outstanding restaurants at the same time, Beyond Meat can showcase the wide variety of dishes that Beyond Pork can be used in with delicious results each time. Consumers in Shanghai will be able to enjoy the Beyond Pork special menu items in each of the five restaurants for a limited time (November 18-24). Follow Beyond Meat on Weibo or WeChat for the latest news and updates for Beyond Pork and other exciting happenings.

About Beyond Meat
Beyond Meat, Inc. (NASDAQ: BYND) is one of the fastest growing food companies in the United States, offering a portfolio of revolutionary plant-based meats made from simple ingredients without GMOs, bioengineered ingredients, hormones, antibiotics or cholesterol. Founded in 2009, Beyond Meat products are designed to have the same taste and texture as animal-based meat while being better for people and the planet. Beyond Meat’s brand commitment, Eat What You Love™, represents a strong belief that there is a better way to feed our future and that the positive choices we all make, no matter how small, can have a great impact on our personal health and the health of our planet. By shifting from animal-based meat to plant-based meat, we can positively impact four growing global issues: human health, climate change, constraints on natural resources and animal welfare. As of September 26, 2020, Beyond Meat had products available at approximately 122,000 retail and foodservice outlets in over 80 countries worldwide. Visit www.BeyondMeat.com and follow @BeyondMeat, #BeyondBurger and #GoBeyond on Facebook, Instagram and Twitter.