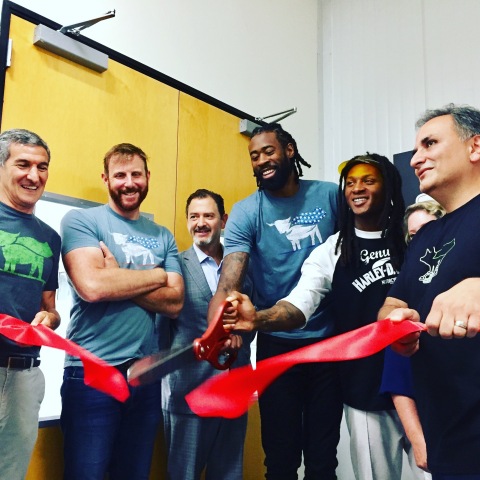 New pilot line cuts concept to commercialization timelines in half

LOS ANGELES--Working to unlock the Future of Protein™, plant-based meat category leader Beyond Meat today opened the doors of their new 26,000 square foot research and development center at the company’s headquarters. The new facility, which houses nearly 100 employees, is the new home to Beyond Meat’s Manhattan Beach Project, which is designed to bring together the world’s best scientists, engineers, food technologists, chefs and managers in service of a single goal: perfectly build meat directly from plants.

Seven-times the size of its existing facility, the Innovation Center supports the company’s Rapid & Relentless Innovation initiative, the goal of which is to continuously iterate the company’s products until they are indistinguishable from their animal protein equivalent.

“The use of science and technology to build meat directly from plants, coupled with a commitment to all natural and non-GMO ingredients, is the core of our company. At Beyond Meat, we strive to understand meat at new levels, and then rebuild it using amino acids, lipids and minerals from plants. What the animal has done throughout history—organize plant material in the form of muscle or meat—we believe we can do more efficiently to the benefit of human health, the environment and animal welfare,” said Ethan Brown, Beyond Meat CEO and Founder. “The path to the perfect build of meat from plants is both long and steep, but with every iteration we are getting closer and closer. I am so pleased to join our special group of scientists, engineers, chefs and managers in announcing the opening of our new state-of-the-art innovation center.”

The new facility is designed to support the company’s highly iterative and rapid style of innovation, one designed to deliver improvements to the marketplace on an annual basis. It is broken into eight distinct labs and footprints, with an emphasis on consumer engagement and learnings. “The new home to the Manhattan Beach Project allows us to reimagine the use of existing technologies for a better understanding of the complexity of meat,” said Dr. Dariush Ajami, VP of Research & Development at Beyond Meat. “The Innovation Center gives us a leg up as we apply this knowledge in our efforts to perfectly build meat directly from plant materials, using only natural ingredients and without genetic modification.”

The new facility also features a test kitchen that will be used to host chefs and culinary experts. The kitchen will offer a gourmet-style space where chefs can experiment and test Beyond Meat products and new innovations like Beyond Breakfast Sausage, which was recently previewed at the National Restaurant Association Show in Chicago.

The continued growth of the Manhattan Beach Project will create close to 50 new jobs over the next year. As part of its recruiting efforts, Beyond Meat is working with universities and research centers in the U.S. and abroad to identify the best and brightest scientists and engineers in their respective fields.

Fueling The Future of Protein

Beyond Meat’s explosive growth and revolutionary approach to building meat from plants is attracting more than just top talent. Recent new investors include DeAndre Hopkins, one of the NFL’s top-ranking wide receivers, who attended today’s ribbon cutting of the new facility to share his passion for Beyond Meat and making plant-based foods more widely accessible. “Beyond Meat’s products are a gamechanger and I’m honored to be here today as we mark this important milestone in the company’s history,” commented Hopkins. He joins a growing list of professional athletes that recognize the power of plant-based protein and are backing Beyond Meat including Tony Gonzales.

The Beyond Burger is the world's only burger that looks, cooks, and satisfies like beef, but is made entirely from plants, without GMOs, soy, or gluten. Since its debut in 2016, more than 25 million Beyond Burgers have been sold. Along with being available in the meat case at more than 10,000 grocery stores, it is also sold on the menu at 10,000 restaurants, hotels and universities including TGI Fridays, BurgerFi, Bareburger, Epic Burger and A&W Canada. Beyond Meat recently announced The Beyond Burger will be available in more than 50 countries and across six continents by the end of 2018. For the latest list of places to find The Beyond Burger and Beyond Sausage, click the where to find button on the Beyond Meat website.

Based in Los Angeles, California, Beyond Meat is a privately held company founded in 2009 with a mission of building meat directly from plants. Spanning frozen and fresh, Beyond Meat’s portfolio of cutting-edge plant-based proteins are sold at more than 30,000 retail and food service outlets nationwide. Investors include Bill Gates, actor and activist Leonardo DiCaprio, Twitter co-founders Biz Stone and Evan Williams, Kleiner Perkins, former McDonald's CEO Don Thompson, Honest Tea founder Seth Goldman, Humane Society of the United States, and Tyson Foods. To stay up to date on the latest, visit www.BeyondMeat.com and follow @BeyondMeat, #BeyondBurger and #FutureOfProtein on Facebook, Instagram and Twitter.