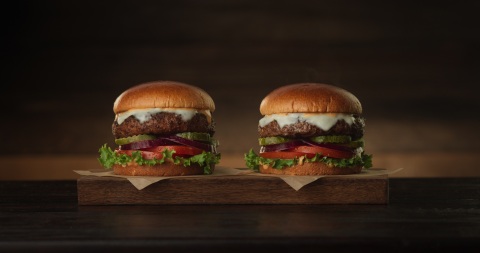 IN THE FASTEST TEST-TO-TABLE LAUNCH IN TGI FRIDAYS HISTORY, THE PLANTBASED BEYOND BURGER IS JOINING THE MENU NATIONWIDE

IN THE FASTEST TEST-TO-TABLE LAUNCH IN TGI FRIDAYS HISTORY, THE PLANT-BASED BEYOND BURGER IS JOINING THE MENU NATIONWIDE

EL SEGUNDO, Calif.--Just in time for the New Year, Beyond Meat® announces that TGI FridaysTM will add the revolutionary Beyond Burger® to the menu at their 450+ U.S. locations nationwide. The addition of The Beyond Burger to TGI Fridays Burger Bar menu is at the center of the brand’s commitment to innovation and reinvigorating current menu offerings.

“Appealing to a more food-forward consumer is a key priority for Fridays in 2018,” said David Spirito, Executive Culinary Director, TGI Fridays. “In answering guests demand for nutritional menu items that fit their lifestyle needs, we saw an opportunity to introduce newly expanded options like plant-based protein. Beyond Meat is leading the way in creating a juicy and delicious product that gives guests the sensory experience of a traditional burger without sacrificing taste.”

TGI Fridays initially tested The Beyond Burger at a handful of locations in October, and after an extremely successful test, The Beyond Burger is becoming the fastest test-to-table menu offering in the brand’s history.

“Consumer adoption of our plant-based meats is quickening month over month. Once people learn first-hand that they can enjoy the delicious upsides of meat while capturing the health and environmental benefits of plant-based eating, consistent use comes down to availability.” said Ethan Brown, CEO and founder of Beyond Meat. “I could not be more pleased that an iconic global restaurant brand, TGI Fridays, is adding The Beyond Burger to their menu.”

Starting today, The Beyond Burger will be featured on the TGI Fridays menu as The Beyond Meat Burger and features a 6-oz. patty seasoned, grilled and topped with white cheddar, lettuce, tomato, red onion, pickles and FridaysTM sauce to appeal to heartier appetites. The Beyond Burger patty can be substituted for any existing builds from the TGI Fridays Burger Bar menu, served on the Challah Bun or “Green Style” on crispy green lettuce leaves without cheese or FridaysTM sauce for a vegan-friendly option.

TGI Fridays is joining a growing number of restaurants, hotels, colleges, sports teams and grocery stores to carry The Beyond Burger. Since May, distribution of The Beyond Burger has seen triple digit growth and is now available at more than 9,000 food service and retail outlets nationwide.

The Beyond Burger is the world's only burger that looks, cooks, and tastes like ground beef from cows but is made entirely from plants, without GMOs, soy, or gluten. The Beyond Burger packs more protein and iron than beef, but with less total and saturated fat.

Based in Los Angeles, California, Beyond Meat was founded in 2009 and is a privately held company with a mission of building meat directly from plants. Investors include Bill Gates, actor and activist Leonardo DiCaprio, Twitter co-founders Biz Stone and Evan Williams, Kleiner Perkins, former McDonald’s CEO Don Thompson, Honest Tea founder Seth Goldman, Humane Society of the United States, and Tyson Foods. To stay up to date on the latest, visit www.BeyondMeat.com and follow @BeyondMeat, #BeyondBurger and #FutureOfProtein on Facebook, Instagram and Twitter

In 1965, FridaysTM opened its first location in New York City. Fridays revolutionized the dining industry and is credited with creating the Potato Skin and popularizing the Long Island Ice Tea, among other culinary creations and cocktails. Today, there are over 900 restaurants in 60 countries which offer high quality, authentic American food and legendary drinks, served with genuine personal service. Bringing people together to socialize and celebrate the freeing and liberating spirit of "Friday" is the concept's founding premise, from which the brand promise "In Here, It's Always Friday®" was born. Find more information and participating Fridays locations by downloading our mobile app or visiting Fridays.com.