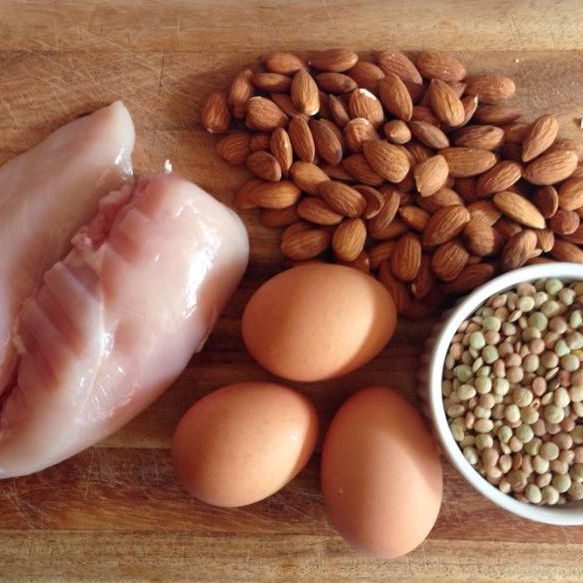 Somewhere down the line in history, people got the idea that meat is the only food which contains any significant amount of protein. Hence why vegetarians are always getting asked the question “where do you get your protein?”– even though it is actually very easy to get enough protein on a vegetarian or even vegan diet. To put this in perspective, consider that a cup of lentils has about 18g of protein, so it would take less than 3 cups of lentils to get your protein RDA. Even foods like bananas and spinach contain some protein.

But some people have taken the argument further by saying things like, “but plants aren’t complete proteins” and imply that, even though plants do contain protein, that this protein is somehow inferior. So let’s look at what the real differences between plant and animal proteins are.

A protein is one of the primary building blocks of your body. They are what make up muscle, bone, skin, hair and many other tissues in your body. If we don’t count water, then 75% of our bodies by weight are made up of protein.

What Happens When We Eat Protein?

Is There Really A Difference between Animal and Plant Proteins?

In terms of components, there is no different between animal and plant proteins.They are both made up of amino acids, and they both contain the same 22 amino acids. However, the ratio of these amino acids is different.

Does this mean that vegetarians and vegans won’t be able to get all of their essential amino acids? Absolutely not.

*There is no need to get all amino acids during the same meal! So, you don’t have to worry about complex protein combinations to get all your amino acids. Just eat a variety of food throughout the day. Besides, who likes to eat nothing but peas all day long?

While there really aren’t any differences between plant and animal protein in terms of components (just different arrangements and ratios of amino acids), there are differences in what else accompanies the proteins.

Meat is notoriously high in calories, cholesterol, and saturated fat – all of which is accredited to growing health problems like obesity and heart disease (okay, the cholesterol one is now controversial, but excess calories and fat are definitely no bueno).

A gram of beef protein contains 14.25 times more fat than a gram of protein from lentils

A gram of beef protein contains 23 times more saturated fat than a gram of protein from lentils.

There may be even more harmful compounds in meat as well. Studies have long shown a link between consumption of red meat and cancer. Recently, scientists think they have found the culprit in red meat which causes cancer. They found a link between cancer and a molecule found in red meat. The molecule, Neu5Gc, is found in high amounts in beef, bison, lamb, and pork. It is not found in fruits and vegetables. The molecule triggers an inflammation response, which can lead to long-term inflammation and tumor growth.

There are also other studies which indicate that consuming high amounts of meat can be dangerous for your health or cause cancer, such as Heterocyclic amines (HCAs) and polycyclic aromatic hydrocarbons (PAHs) which form when meat is cooked at high temperatures, or the calcium which is released when high amounts of sulfur-containing meat is consumed.

The bottom line? Vegetarians and vegans may need to worry about some nutrients like iron and B12, but protein probably isn’t going to be an issue. You can easily get enough protein and essential amino acids on a plant-based diet, and you will probably experience some health benefits too!