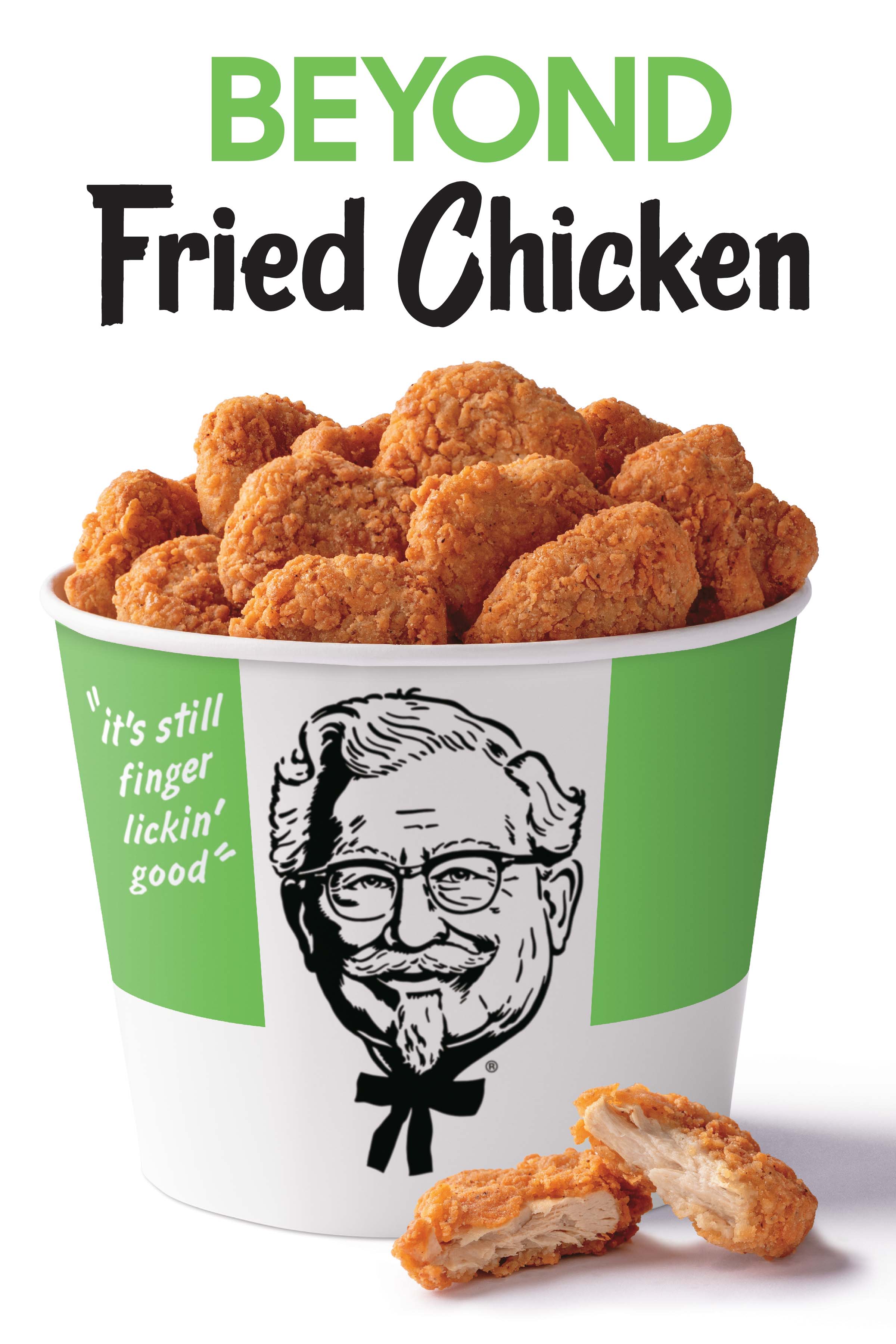 KFC LEADS AS FIRST NATIONAL U.S. QSR TO TEST PLANT-BASED CHICKEN, IN PARTNERSHIP WITH BEYOND MEAT®

KFC LEADS AS FIRST NATIONAL U.S. QSR TO TEST PLANT-BASED CHICKEN, IN PARTNERSHIP WITH BEYOND MEAT®

The new plant-based Beyond Fried Chicken offers the finger lickin' good fried chicken flavor only KFC can deliver as a perfect choice for those searching for plant-based meat options on-the-go.

Atlantans will be the first to get a taste of KFC's new Beyond Fried Chicken as part of an exclusive, one restaurant test on August 27 at the Cobb Parkway restaurant near SunTrust Park in Atlanta (2637 Cobb Pkwy South East, Smyrna, Ga.).

Those who want to be among the first to try the new plant-based Beyond Fried Chicken are invited to stop by the Cobb Parkway restaurant for a complimentary sample of Beyond Fried Chicken from 10:30 a.m. to 6:30 p.m. tomorrow, August 27 (with purchase of any KFC menu item, while supplies last).

KFC guests who want to make it a meal can pick from several Colonel-approved Beyond Fried Chicken options:

KFC turned to plant-based leader, Beyond Meat, to create a finger lickin' good plant-based fried chicken that will appeal to lovers of both Beyond Meat and KFC. Customer feedback from the Atlanta test will be considered as KFC evaluates a broader test or potential national rollout.

"KFC is an iconic part of American culture and a brand that I, like so many consumers, grew up with. To be able to bring Beyond Fried Chicken, in all of its KFC-inspired deliciousness to market, speaks to our collective ability to meet the consumer where they are and accompany them on their journey. My only regret is not being able to see the legendary Colonel himself enjoy this important moment," said Ethan Brown, founder and CEO, Beyond Meat.

Beyond Meat began developing its revolutionary plant-based meat in 2009 and since then has introduced several breakthrough products across the brand's beef, pork and poultry platforms. The announcement of plant-based chicken makes the KFC and Beyond Meat partnership a unique one and the first of its kind in the U.S. QSR space.

KFC has a history of frequently testing unique and craveable menu items as a part of the brand's food innovation strategy, considering food trends and evaluating customer feedback to KFC's test offerings. This limited, one-restaurant test of Beyond Fried Chicken is part of KFC's continued commitment to understanding its consumers' tastes and preferences.

About Beyond MeatBeyond Meat, Inc. (NASDAQ:BYND) is one of the fastest growing food companies in the United States, offering a portfolio of revolutionary plant-based meats. Founded in 2009, Beyond Meat has a mission of building meat directly from plants, an innovation that enables consumers to experience the taste, texture and other sensory attributes of popular animal-based meat products while enjoying the nutritional and environmental benefits of eating its plant-based meat products. Beyond Meat's brand commitment, "Eat What You Love," represents a strong belief that by eating its portfolio of plant-based meats, consumers can enjoy more, not less, of their favorite meals, and by doing so, help address concerns related to human health, climate change, resource conservation and animal welfare. Beyond Meat's portfolio of fresh and frozen plant-based proteins are currently sold at approximately 53,000 retail and foodservice outlets worldwide. Visit www.BeyondMeat.com and follow @BeyondMeat, #BeyondBurger and #GoBeyond on Facebook, Instagram and Twitter.